We've made it ridiculously easy to get your Emporio Armani watch repaired or serviced. You can start right now, and it won't break your wallet. 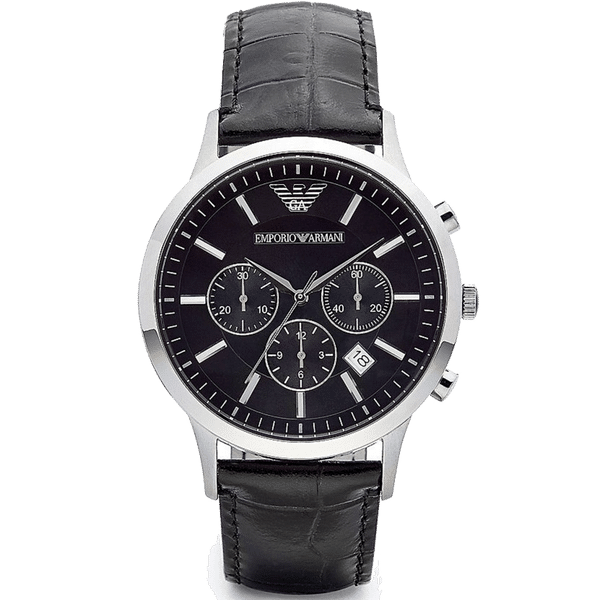 Emporio Armani watch repair near me?

Take a walk to your nearest post-office and go direct to the UK's leading Emporio Armani online watch repair centre.

We’ve made it safe, fast and FREE to send your Watch to Repairs by post. Just wrap, pack and attach our free Royal Mail postage-paid shipping label. Repairs by post will have your Emporio Armani watch repair off to a flying start in no-time, and with the peace of mind you’re are dealing with Britains leading Emporio Armani watch repair near me, provider.

Has your Emporio Armani watch stopped working, ticking or in need of a service?

Has your Emporio Armani watch battery died? Swiss-made batteries with a two-year guarantee. Replaced and resealed then pressure tested to ensure your watch stays water-tight. This battery replacement service stops 75% of Emporio Armani watch mail-functions in their tracks.

Leather, silicone or metal bracelet? Let Repairs by post update your Emporio Armani with a manufacture original strap or replacement. We can source and supply original and replacement Emporio Armani straps and bracelets for all models.

If your watch-glass or crystal has broken, scratched or worse smashed, we can help. Use our watch Emporio Armani glass replacement service. It's the SOS cost-effective solution to get your Emporio Armani fixed and looking like new again with manufacture or replacement watch glass crystals and a professional reseal and test.

The crown sets the time, date, winds and starts/stop your watch. Accidental damage, miss-use, or impact can cause malfunction or worse break the crown and stem. The Emporio Armani crown and stem replacement service will get your Emporio Armani operating and looking like new.

Over-time the watch dial, face, digits and hands can become tarnished, corrode or worse break or fall-off: water entering the watch case, a broken watch glass, or leaky battery can cause any of these unsightly issues. We can help fix these issues and get your Emporio Armani watch looking new again.

Vintage Emporio Armani hold a lot of emotion with their owners and often these rare pieces are irreplaceable. It’s recommended that your Vintage Emporio Armani watch is maintained and looked after professionally. Repairs by Post offer a fast, professional Vintage watch repair service by post to ensure your Vintage timepiece continues to work for years to come. If your watch has stopped working, broken, needs a service or anaesthetic make-over our expert team can help. If your vintage watch has stopped working don't give up hope. Repairs by post to the rescue. With more than 30 years experience our expert team can source original or replacement parts. 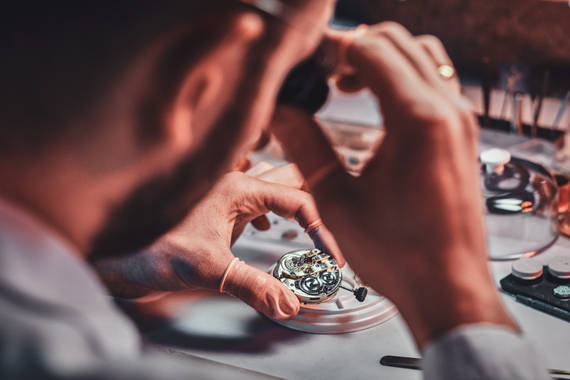 What happens during a Emporio Armani full service?

We are unbeaten on price and service for Emporio Armani servicing and repairs in the UK. As part of our competitive price promise, we will match or beat any written quotation for a like-for-like door-to-door freepost service. Submit an inquiry below to get started.

About the Emporio Armani watch brand

Another watch range born from a fashion house. A designer collection of men’s and ladies watches that contains styles for every occasion. From super sleek to chunky, at a high price point, it is no wonder that Armani watches are consistently at the top of the best-seller list. Our current favourite is the Maccanico range but for the ladies, something much more classical, the Emporio Armani Gianni ladies watch.

What is the warranty on a Emporio Armani watch?

When you buy your Emporio Armani watch, it's covered by a manufactures warranty.

If your Emporio Armani warranty has expired, Repairs by post can provide an estimate for both watch repairs and servicing. Don’t worry, it does not need to break the bank, and you can start for free. 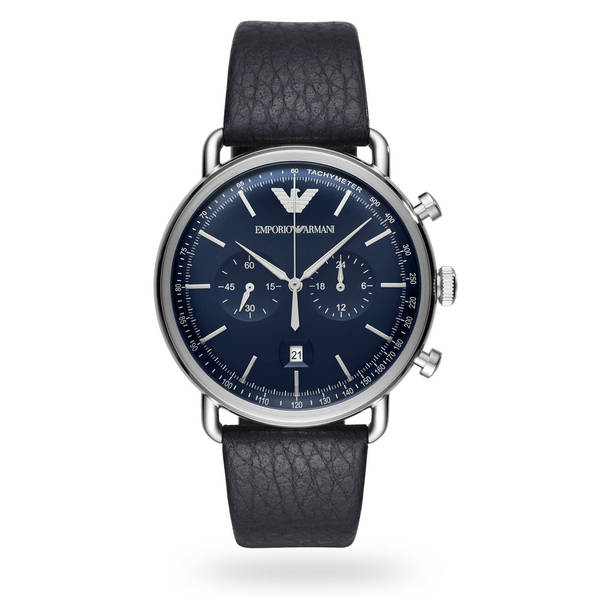 What is the Emporio Armani watch service interval?

Keep your Emporio Armani watch in working order periodic servicing according to brand guidelines. These are the recommended service intervals from Emporio Armani:

If your Emporio Armani requires a service or water test, Repairs by post can help.

Make sure you are maintaining your Emporio Armani timepiece. When investing in a piece of luxury wristwear, ensure that your timepiece is continually accurate and in good working order to keep it in the best shape?

To optimise the performance of your Emporio Armani watch, regular upkeep and servicing are necessary. Repairs by Post recommended that your watch is serviced every 3-5 years. Maintenance can vary and will depend on the wear and tear your watch undergoes.

At Repairs by Post, we offer a professional watch battery replacement service. Like most watch batteries, a Emporio Armani battery may work for up to three years. With something as delicate as a Emporio Armani watch, it is essential that you send your watch away as soon as possible.

When your battery dies, contact the experts at Repairs by Post for watch battery replacement. Did you know that dead battery cells can harm the watch movement if left unattended? Contact a member of our team today for more information about Emporio Armani battery replacement.

To guarantee active water resistance, Emporio Armani recommend that you do not expose your timepiece to hot water.

Emporio Armani recommend that you clean your watch with a simple soft cloth and water only. We advise you do not submerge your watch underwater. Only do this if you watch is water-rated

Should your watch be exposed to saltwater use, make sure that you take the time to rinse it under tap water and wipe it dry with a soft cloth.

If your watch has a metal band, make sure you wash periodically. We recommended that your watch is cleaned with a soft brush that is dipped in mild, soapy water.

Wipe your watch dry with a soft cloth.

Make sure that your timepiece is always set in the closed position (otherwise known as the normal position. Make sure you tighten the screw-lock crown down completely.

If you need to change the time on your FESTINA watch, it is advised to avoid manually changing them during the times of 10 pm, and 2 am. This could interfere with the setting of your watch as this is when the date is automatically due to change.

Making sure the crown is pushed in will prevent infiltration of water or dust, which could lead to internal damage.

Watches are sensitive instruments; therefore, it is crucial to avoid your watch from being exposed to rapid changes in temperature, both hot and cold.

Specific temperatures and movements can damage your timepiece. If your watch is if exposed to temperatures above 60 degrees it could damage the inside or outside of your watch; therefore, we recommend you avoid leaving your watch in high-risk areas such as windows.

The history of this watch brand dates back to the early 1900s. The founder of the brand Giorgio Armani was born in northern Italy on July 11th, 1934. Giorgio played with a career in Medicine. However, it was not his calling. Giorgio decided that a role in the medical sector was not for him.

When Giorgio got a job as a window dresser in a Milan department store, his boss was so impressed with his work that it wasn’t long before Giorgio became a seller for the menswear department.

Soon after he gained this role, Mr Armani designed clothing for Nino Cerruti and then continued to work as a freelancer in the mid-1960s.

It was in October 1975 that Giorgio launched his first collection of men’s ready-to-wear clothes for the spring and summer of 1976.

They launched Emporio Armani in the 1980s after considerable success with the Giorgio line. Giorgio branched out addition to his fashion collections he added Emporio Underwear, Swimwear and Accessories arrived on the scene in 1982.

Over the years, the brand has had several celebrities dawning their styles. Faces of the brand include world superstars such as David and Victoria Beckham, Cristiano Ronaldo, Rafael Nadal, Megan Fox and Rihanna.

Boutiques exist all over the world, and the label is the only secondary line that Giorgio Armani designs a large part of and commands a spotlight at Milan Fashion Week.

With years spent working in Italy’s fashion industry, Giorgio Armani brought business and expert fashion knowledge to the design table. Armani started small, creating his first menswear pieces under his own name. Still to this day, his iconic leather bomber jackets inspire fashion followers from all over the world.

This was a big year for the brand as The Armani enterprise expanded offering signature looks and quality for less with the launch of sister lines, Armani Jeans, and Emporio Armani.

The brand’s world-famous logo was also born this year, and Armani’s initials and an imperial eagle are first seen appearing on jeans, T-shirts, and shoes.

After the death of the business partner Sergio Galeotti, Armani became the head of all business duties. Still, to this day, Armani designs and manages the business.

Watches took control of the business in the 1990s and even now, Armani is creating modern timepieces that Armani consumers love.

It was back in the late 1990s when Armani signed a license agreement with Fossil. Fossil is the USA’s largest watch manufacturer, creating sustainable timepieces with a sense of style.

The collection became part of the Emporio Armani brand. The first Emporio Armani watches were a mix of classics and chic design. Armani and Fossil continued their partnership, and the watches evolved to an even more chic watch line of high quality.

Armani announced at 70 years of age and 34 years at the helm of his brand that he was planning on keeping his company private for as long as he could.

This was the year that the Emporio Armani label launched a line of contemporary sports-influenced clothing, shoes, and accessories all under the name of EA7.

Another landmark year for the brand as Armani is named Best Designer at GQ’s Men of the Year Awards.

The brand expands further opening the first Armani hotel in the world’s tallest building, the Burj Khalifa in Dubai. Alongside the release, the designer created Armani Dolci – a range of fine chocolates, ice cream, and other confectionaries.

Due to the continuing success seen by the brand, the company announced an 80% rise in profits.

The designer turned 80 in July 2014. With years of experience in fashion and watch design, Giorgio Armani is officially the most successful Italian designer in the world.

This year he also released the Giorgio Armani Swiss Made watch collection and told The Telegraph that he wanted to change the fashion and watch industry:

“It is hard for a fashion brand to be taken seriously for watches, competing with houses that have an expert watchmaking history, and some have started too high in the market. We have to prove our legitimacy first, with excellent design, detail, and reliability.”

If you would like more information on Armani watch repair, call us today!